Villasimius is located in the south-eastern part of Sardinia in the area that has been part of the Marine Protected Area of Capo Carbonara since 1998.

Thanks to this favourable position it enjoys a typical Mediterranean climate with mild winters and hot summers. Summer extremes barely exceed 40 °C. The enchanting and uncontaminated landscapes make it one of the most sought-after destinations in Sardinia for a holiday dedicated to sea and relaxation.

The route to Villasimius from Cagliari, about 50 km away, is already fascinating and impressive. Heading towards the east coast, you take the road that runs along the Poetto, Cagliari’s long beach (about 7 km in length) on the right, and the Molentargius pond on the left, which until 1985 was used for collecting salt. Continuing along the scenic coastal road, we come across the beaches of Cala Regina, Cala ‘e Moru, Geremeas, Genn ‘e Mari and Solanas, the last before plunging into the Marine Protected Area of Capo Carbonara, which extends from Capo Boi to the beach of Cala Pira.

“Sardinia is characterised by fantastic coastlines with crystal-clear waters, mainly due to the intensity of the winds that often blow through it from all directions. The fortunate naturalistic configuration of the Villasimius marine park, which includes about 20 predominantly sandy beaches, allows you to choose, from time to time, in which of these to spend the day depending on the wind blowing.” 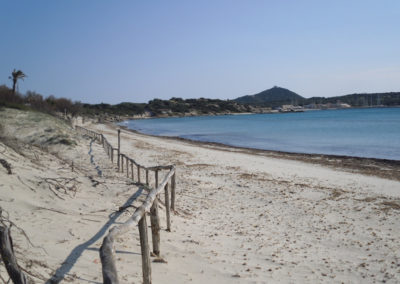 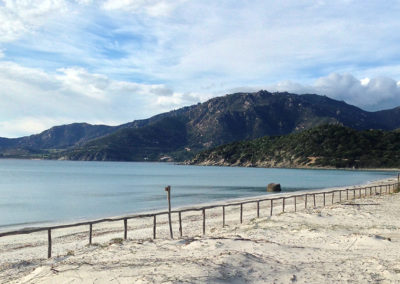 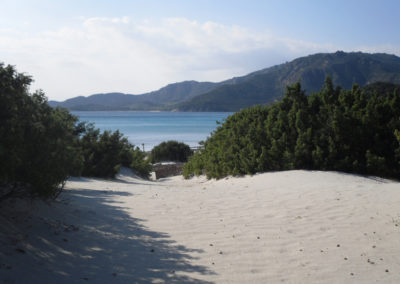 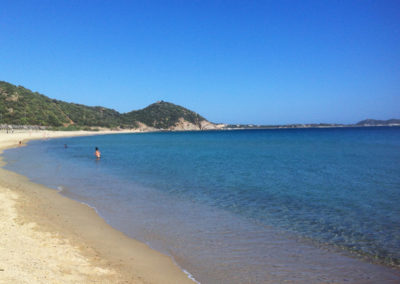 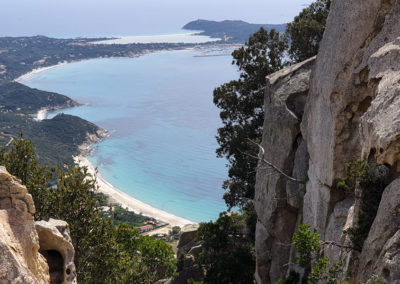 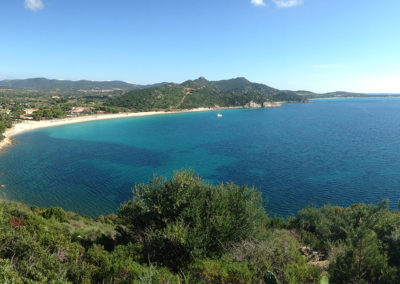 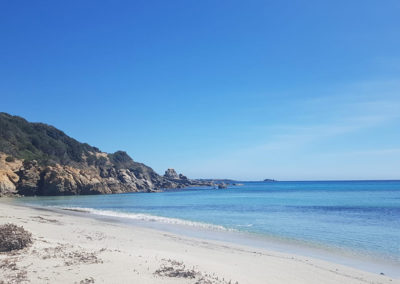 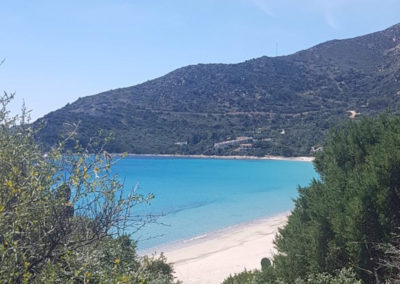 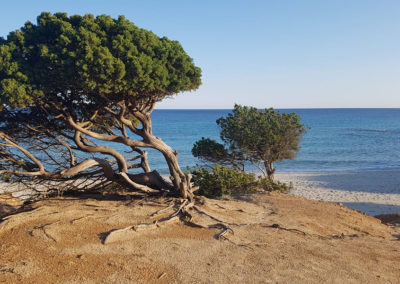 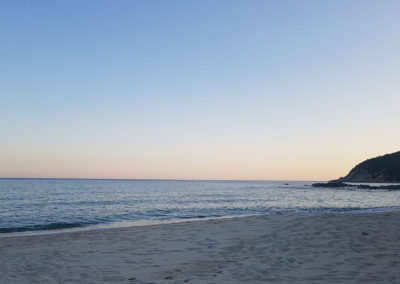 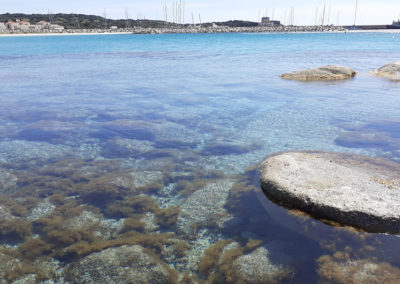 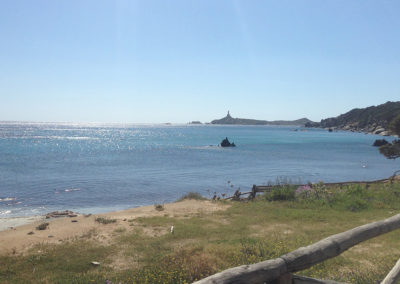 From the Capo Boi promontory, we enter the area of Villasimius to find all the beaches along the coast towards Costa Rei.

Here are the best-known beaches, and the beaches that are an absolute must to take at  least one swim: Porto Sa Ruxi is outlined by three small coves of rocks and light sand surrounded by a dense and flourishing Mediterranean vegetation.

Cuccureddus is a beach whose main access is private but can be reached by sea or by taking a land route through the rocks; it is characterised by fine, light-coloured sand and the seabed is of medium-high depth.

Campulongu is a sandy beach of fine, light-coloured sand, which is longer than it is wide, with a seabed so shallow that, depending on the currents, it can create a veritable pool of child-proof water…. Pictures are a must!

Spiagga del riso (Rice beach), so called because at one time – unfortunately in the past – the grain of the sand really did resemble grains of rice. Following the construction and extension of the marina pier, the natural exposure of the beach to the sea currents has changed, resulting in almost total erosion of the sand. 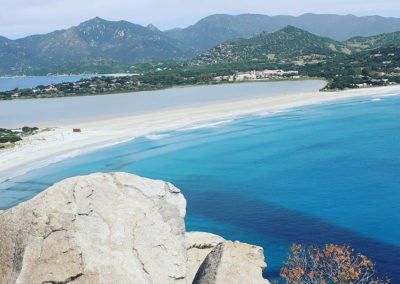 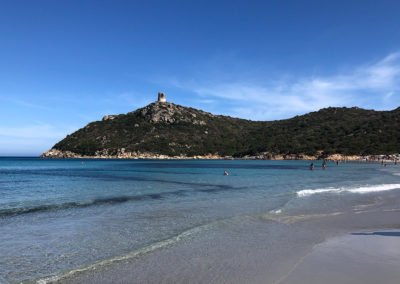 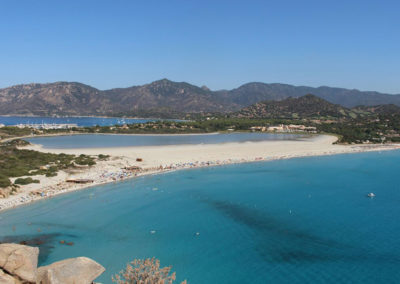 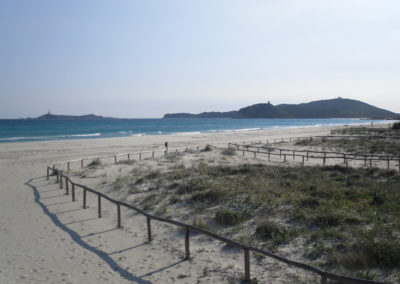 Porto Giunco is a very long beach of fine, light-coloured sand, with clear water and shallow waters. The 16th century Spanish Tower makes the view towards the sea characteristic, while behind it, the numerous colony of pink flamingos in the Notteri Pond makes a stop on the beach even more impressive: it is not difficult to watch the flamingos flying at nightfall.

The beach of Simius is the closest to the town – about 1.5 km away – and is characterised by light-coloured, fine-grained sand and a seabed of medium depth. 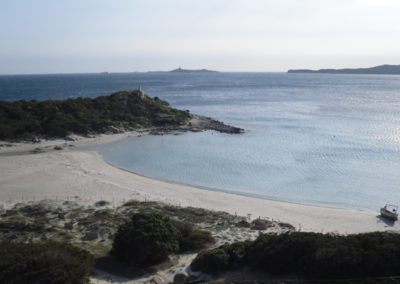 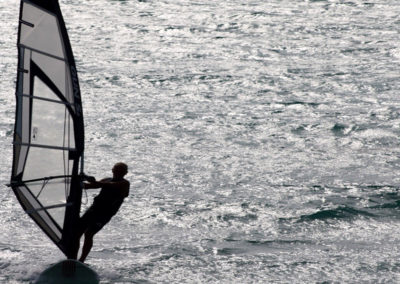 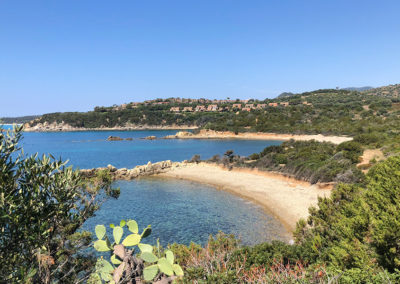 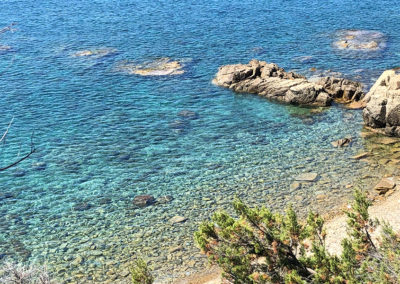 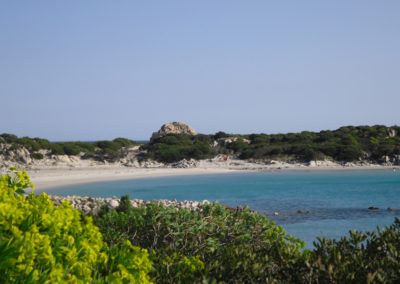 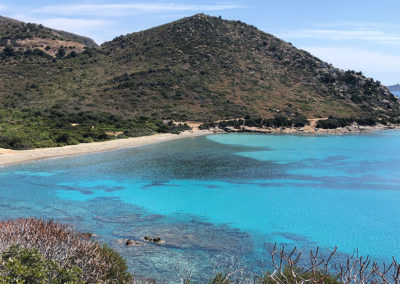 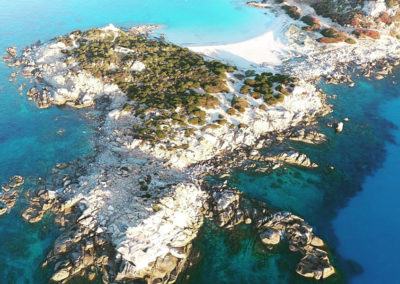 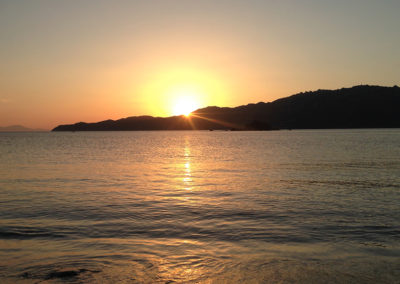 Punta Molentis is the undisputed pearl of the area. Also known as the ‘beach of the two seas’, it takes the form of an isthmus whose two sides, facing south and north respectively, take on very different aspects: the bay to the south is characterised by fine sand, crystal-clear water and a fairly shallow seabed, while the side facing north gradually takes on a rocky shape, overlooking a high seabed. A day on this beach, accompanied by an excellent fried squid and a glass of chilled Vermentino wine from the fishermen’s restaurant, will make up for the wait due to the limited access: the entrance is limited to a maximum of 200 cars per day in June, July, August and September.

From the tourist harbour it is possible to visit the Marine Park, taking advantage of a series of services offered by various tourist operators: you can choose between daily or half-day excursions, the fascinating experience of fishing-tourism, sports outings for snorkelling or, for the more experienced, diving. It is also possible, in complete autonomy, to hire a dinghy without a licence.

For those who want to spend some time away from the beaches, there is also the possibility of horse riding along the coast, cycling, quad biking, golf and outdoor sports.

Not to be forgotten are some of the area’s historical and cultural attractions: the Fortezza Vecchia (Old Fortress), adjacent to the marina, is a 14th-century building that served as a guard and defence for the area, and is now a museum; in the centre of the town is the Archaeological Museum, which displays evidence of antiquity found in the area, and the fascinating Casa Todde, which houses the Museo del Mare (Sea Museum).

If you have the chance to be in Villasimius in certain periods, you can attend some particularly interesting events, such as the one on the third Sunday of July for the procession at sea to the Isola dei Cavoli: the festival of the Madonna del Naufrago is celebrated during which a wreath is laid on the submerged statue of the Virgin and Child, created by contemporary sculptor Pinuccio Sciola. The feast of Santa Maria is celebrated in the first week of September, with performances by folk groups and a parade of decorated floats. On 24 October, there is a tribute to San Raffaele Arcangelo, with fireworks, traditional songs and dances.

Evening life in the centre of Villasimius is characterised by a long promenade along the main street with shops and clubs open until late at night, street-artists, live music; there are also ice-cream parlours, restaurants and pizzerias.